WordPress Updates and What it Means for Web Developers in 2021

Reading Time: 9 minutes
The Daily Blog Point / Wordpress  / WordPress Updates and What it Means for Web Developers in 2021
0

WordPress Updates and What it Means for Web Developers in 2021 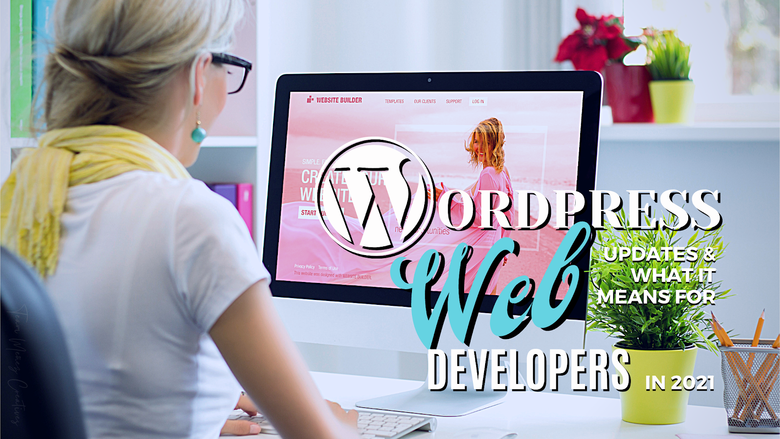 WordPress underwent significant changes in August 2020 with the rollout of WordPress 5.5 and major releases in December 2020. The latest development includes a team of all-women spearheading the release.

During the WordPress 5.5 release, it was announced that a women’s all-women squad would shadow the release crew to help learn the release process. Experts are still wondering if WordPress still stands as the best content management system (CMS) amid all these exciting developments (CMS).

Changes Since the Recent Updates

The WordPress team has worked hard to build WordPress, and they all have done a great job considering the minimal development time they had to work with.

The changes implemented include the following:

However, for the most popular CMS that powers about 39.2% of all websites, it is not always good to rush updates. Their CMS platform superiority is not foolproof.

One way to improve customer satisfaction with leading companies and bring out the best digital solutions for businesses is to answer the unmet consumer demands of customers who are not completely satisfied by current providers. Technology is the same way.

The built-in Gutenberg YouTube block also doesn’t work on some pages. It is not acceptable for WordPress since it is the current top CMS platform.

However, Joost de Valk, founder of Yoast, points out that Phase 2 of Gutenberg, which is also being rolled out this year, will replace widgets and menus with blocks. While mainly good news for developers, WordPress has also announced that it will soon be increasing its minimum PHP requirements.

However, besides these, there are many more reasons why WordPress will continue to dominate in 2021.

Some Factors Why WordPress Remains a Powerful CMS Platform for Web Developers:

The download counter for WordPress 5.5 is 65 million. If the WP community had been so disappointed by past versions, Eckstine wouldn’t have made headlines. More than 7 million live websites are using WordPress 5.5.

Bear in mind, these are not the number of active WordPress websites, but the latest version active and historical download numbers. The counts may not include the 36 WordPress versions.

WordPress remains the fastest developing and growing web platform. Google Trends shows that WordPress keywords rank higher among search engine queries than its competitors, such as Drupal, Blogger, and Sharepoint.

As a result of this, blogs and websites powered by WordPress get more leads and draw more traffic.

WordPress has an enormous quantity of traffic each day. Its record was 187 million page views on its election day in 2016.

Its users publish 70 million posts steadily every month, and it has an Alexa website ranking 52 around the world. More than 400 million viewers viewed more than 20 billion pages monthly in 2020.

At present, the most well-known companies worldwide prefer WordPress as their CMS. These are some of the most significant corporations on the Fortune 500, like  TED, NBC, CNN, TechCrunch,  People Magazine, UPS, the NFL, and the like.

Jetpack is a WordPress plugin for traffic, social media, security, and backups. WordPress users published 374 million posts to social media sites through the plugin. Users can also optimize, archive, and deliver millions of images from WordPress.com.

Akismet protects comment sections from spam and other types of attacks. The plugin avoids brute force attacks in over 1 million active downloads.

WooCommerce is the most popular eCommerce app for WordPress. There are more than 1.5 million operating online stores with a 27% market share.

WordPress has 1,149 workers across 72 countries. They can accommodate 175 million unique visitors with just a fraction of Yahoo’s employees. Its open-source design benefits its 100% remote workers.

But despite this, they work hard to keep users secure. As a matter of fact, WordPress Denied 40% of DMCA Takedowns and denied 65% of Information Requests.

Despite being the most popular CMS, the WordPress platform leaves room for more creativity, innovation, and development. The current release of 5.6 by an all-women group shows that development is heading in an exciting direction. Amazingly, 5.6 was just released, and it has been almost 2 million times (as of this writing).

Its community also continues to thrive and caters to users, both beginners and professionals alike. The market share of WordPress also increases year by year.

The Future for WordPress and Web Development

Gutenberg brought life into WordPress, attracting a new community of users, developers, and bloggers. But even with the Gutenberg updates, WordPress itself has failed to improve.

Phase 2 of the Gutenberg enhanced blocks and menus. PHP would also allow for more advanced blocks to be used as they are not specified in the editor’s scope.

WordPress claims it can be used with PHP 3.x and up. It stopped a lot of web hosts from changing. Developers want WordPress also to introduce new standards to enhance their service.

The redesign to WordPress has had not only some internal improvements but also some significant updates. Josepha Haden and Joost De Valk each take newly-formed leadership positions within the concern. The WordPress Government Project is also gaining traction.

Developers look forward to the heart of WordPress that focuses on collaboration. It could open up many doors for new business ideas and make WordPress a far more effective publishing tool.

The entire 5.0 playbook features new installations to inspire people who think the Classic Editor is too difficult to communicate with. Even in other areas of WordPress and its front end growth, Gutenberg will also be more popular.

The Core Team’s challenge is to combine a front-end editor with the traditional long-form writing experience of WordPress seamlessly.

As Gutenberg is like a revival of sorts for themes and theme creators, it will impact themes. A decoupling of themes from plugins and content can occur as the theme’s characteristics are blocked within the database.

We will see more WordPress page builders grow. Each page builder has its community. Over the years, there have been several page builders, but one group has remained alive.   Some groups have evolved into something new.

For instance, Gutenberg’s addition makes page builders unnecessary for blog post customization. Due to growing competition, features of these page builders have been discontinued.

Even though this transition has taken place, they have and will continue to expand, with the community around them, no matter what changes have happened to WordPress.

Multi-user editing has also been used for usability, content creation, CRM, and more. Making the most out of collaborative tools for business will help you to thrive in the digital age. We will see more applications and interactive tools in working this way.

WordPress cannot satisfy everybody, but WordPress continues to serve most of the world’s best websites compared to other CMS platforms. It is highly accessible and stable. WordPress protects its users, and it addresses any security problem it encounters.

WordPress has a strong customer support and community of experts and enthusiasts, so there is always someone around to help you. These and more factors help WordPress dominate as a premier CMS this 2021 and beyond.

Mayleen Meñez used to work in media before finding her true passion in NGO work, travelling the Philippines and Asia doing so. She homeschools 3 kids and loves reinventing Filipino dishes. She is a resident SEO writer for Softvire Australia and Softvire New Zealand.

WordPresswordpress in 2020WordPress in 2021Wordpress Update

Mayleen Meñez used to work in media before finding her true passion in NGO work, travelling the Philippines and Asia doing so. She homeschools 3 kids and loves reinventing Filipino dishes. She is a resident SEO writer for Softvire Australia and Softvire New Zealand.