Typewise V3.0 – The Next Generation Keyboard Files a Patent in 2022

Typewise V3.0 – The Next Generation Keyboard Files a Patent in 2022 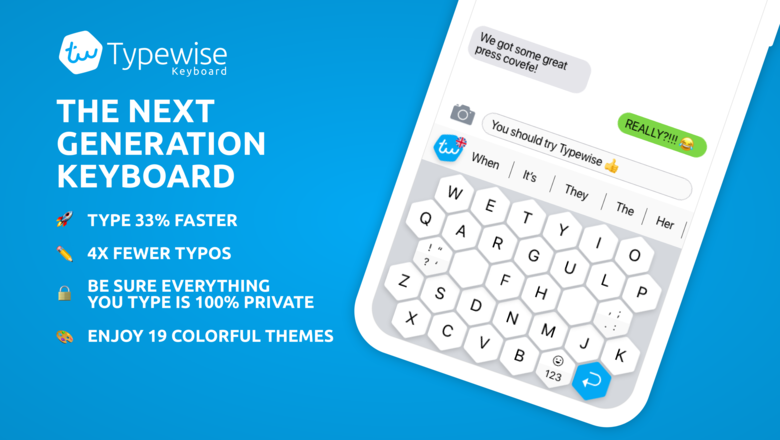 In July 2020, we were glad to announce the arrival of the auto-correct technology app Typewise 2.0 and now we are excited to write about the launch of an improved version 3.0. Typewise is a Swiss deep technology company which aims to improve the way we communicate with our friends and family through text messaging. It was founded by Janis Berneker and David Eberle who are extremely passionate individuals working to combine the smart auto-correct and predictive text with multi-language support.

In 2019, ETH Zurich published a marvelous case study on smartphone typing in collaboration with Aalto University of Helsinki and University of Cambridge. As per this research, it was concluded that smartphone users are able to type 70% faster than other mediums using only one or two fingers at most. But, the maximum typing speed achieved on a smartphone is still a mere 36 WPM. It is understandable that millennials do type way faster than someone in their 60’s.

In the past few years, the keyboard layout hasn’t improved much with respect to the smartphone revolution. All smartphones still use the same old QWERTY keyboard. However, the QWERTY keyboard was never designed to be used with two fingers but it was designed to be used with all fingers on a typewriter. Keeping this in mind, the talented team at Typewise worked on the app and have dedicated thousands of hours in research and development to develop a dream keyboard for smartphones.

In 2022, Typewise filed a text prediction patent that is significantly better than Google and Apple’s text prediction keywords. With that, Typewise has enhanced its offering with its initial successful keyboard app along with the newly launched writing assistant for desktop and API.

The eye-catching honeycomb layout along with the advanced autocorrect and text prediction functionality has also impressed the judges of the Consumer Electronics Show (CES), winning Typewise Innovation Awards in both 2022 and 2021.

Having said that, the Typewise app has been downloaded more than 1 million times and has more than 250,000 active users. Let us throw some light on the features of the Typewise keyboard.

Typewise benefits from years of experience of working on keyboard apps for hand-held devices. They believe that the normal QWERTY keyboard on a smartphone is not very user-friendly due to the small sized keys. It empowered them to come up with a large sized hexagonal keyboard which helps the precise movement of your fingers to reduce typos and increase speed and efficiency.

By performing simple gestures users can type a capital letter, delete or backspace text or restore a text deleted by mistake. This is possible through a left to write swipe or an up/down swipe. There is something great about this gesture based typing which increases the efficiency of the Typewise keyboard.

According to the study, auto correction helps to improve a user’s typing speed. However, there is no improvement in error rate. There could be two simple reasons: one, the autocorrect doesn’t recognize the correct word and second, it tries to correct an unknown word for example: a name. Typewise has solved this problem by enabling a language independent autocorrect feature. Moreover, it is also equipped to learn most repetitive words from another language and offer corrections accordingly.

One of the best features of Typewise is its multi-language support. Typewise allows you to choose from 30+ languages and you can use multiple languages simultaneously. It also has a custom dictionary which can learn input languages and provide predictive text accordingly. In addition to this, Typewise has added support for the Hinglish language specially for Indian users due to growing demands from the indian subcontinent.

In addition to helping the users with improved typing speed, advanced auto-correct and multi-language support, it also offers a secure medium for texting. It ensures the users that no typed data is stored ensuring complete user privacy. This is an important feature for individuals looking for a safe and secure medium of communication.

When you think about all the possible tasks possible on Typewise, one would think of it to be a clunky app to use. However, the look and feel of the app is sophisticated and extremely simple. The layout is very easy to adopt with easy to learn gesture navigation.

The Typewise app is free to use with basic functions. The price for Typewise premium has been reduced by 70% for all indian users and the new price is ₹249/year or ₹49/month. The app is completely ad-free and protects privacy. It is now available in more than 40+ languages and many more to come. Typewise has recently won the 2nd place in the Swiss AI Award and won Gold in the Functionality category and Silver in the innovation category at the “Best of Swiss App Awards 2020” along with being named as the CES 2021 Innovation Awards Honoree.  If you would like to know more, you can download the android or iOS app.