Reading Time: 8 minutes
The Daily Blog Point / Gadgets  / Top 5 Smartphones to Buy in 2021 – Everything You Need To Know
0 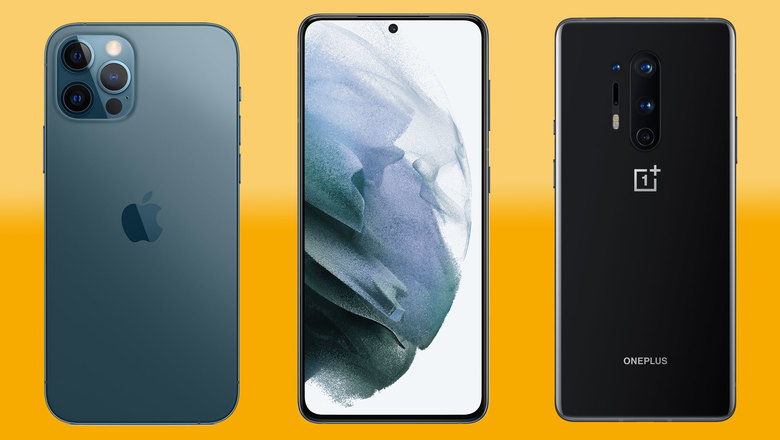 If you are looking for a new smartphone in 2021 but are not sure which one to go for, we have got you covered. Rather than offering a list with too many choices which would confuse you in the end, we have made a list of some of the best smartphones that you can buy in 2021. The list includes budget smartphones costing from $300 or less to premium snazzy smartphones costing north of $1000.

In 2021, if you are looking to buy the best smartphone then it should at least last you a couple of years. In recent years, the Smartphone upgrade cycle is slowing down and the mobile manufacturers are making it hard for your smartphone to last beyond a couple of years by introducing new features and updates. So, if you are looking to cut the chase, you can scroll down to view our top favorite picks this summer.

Last year Apple released four new variants of the iPhone 12, something which they have never done before. Irrespective of multiple choices, the conventional model (iPhone 12) is still a great choice for most users. The traditional iPhone 12 which is priced around $830 for a 64GB variant has to be the best smartphone for most people.

Essentially, it has the same design, same processor and similar wireless charging option, Face ID and 5G support along with front and wide-angle rear camera at a much lower price than iPhone 12 Pro. Apart from that, it is available in five trendy colors for you to choose from. When you compare it with iPhone 12 mini, the iPhone 12 has a bigger display and battery which are crucial aspects for most users. Moreover, it has one of the best cameras available on smartphones at this price. In iPhone 12, you will just not get the telephoto camera that is exclusively available only on iPhone 12 Pro and 12 Pro Max which most people will not miss.

Samsung Galaxy S21 Ultra is undoubtedly the best android smartphone available in the market. It comes with an impressive 6.8-inch screen and superior cameras that can compete with iPhone 12 Pro and 12 Pro max in terms of quality. The Galaxy S21 Ultra has some of the best all-round specifications on Android. The latest Snapdragon 888 is the fastest processor available on Android. It is compatible with a S Pen stylus if you like using a pen with your smartphone but you will have to purchase it separately.

The screen has a high refresh rate which makes scrolling a lot more fun. The S21 Ultra comes with a gigantic battery that will last almost two days for most users with moderate to heavy usage. A lot has been said about the sluggish software on Samsung phones and hence the OnePlus 9 Pro would be a better choice if you are a stickler for a sleek experience. Moreover, the Samsung Galaxy comes with four cameras: a wide-angle camera (108- megapixel), an ultrawide camera and two distinct telephoto lenses. The Galaxy S21 Ultra is priced at $1,199 which is quite expensive considering other smartphones on the Android market.

The One Plus 9 is a more affordable model from the OnePlus 9 Pro, which is again a superior phone at that price. Though you are not losing a lot by going for OnePlus 9 which is significantly cheaper than the Pro version. The One Plus 9 comes with a Snapdragon 888 processor and 65W wired charging along with a terrific ultrawide camera. The rear sensor on OnePlus 9’s camera is larger than any Android smartphone and has a 50 megapixel resolution. Similar to iPhone 12 and Samsung Galaxy S21, you will miss a few unique features on OnePlus 9’s camera compared to OnePlus 9 Pro.

Interestingly, OnePlus doesn’t offer a telephoto lens like Apple or Samsung does with its premium smartphones. Keeping this in mind and a few premium camera features, we believe OnePlus 9 is an impressive smartphone.

Google offers a budget smartphone for users who like Android and the Google Pixel 4A is a natural choice. It doesn’t sport the largest screen or the fastest processor for an Android phone but it has a primary vision of Android that will get software updates for at least three years. Unfortunately, there is only a single variant: black color with 128GB storage for $349. The Pixel 4A got popular due to its terrific camera which can be compared to smartphones costing more than $1000 or more. That is because of Google’s image processing software which makes it special.

The remaining features of Pixel 4A are decent for a $349 smartphone which has a 5.8-inch screen and RAM enough to allow apps to keep running in the background. Moreover, it doesn’t come with IP water resistance but that is fine considering it’s a budget smartphone. So, Pixel 4A is the best option if you are looking for an Android smartphone for under $400.

The latest flagship smartphone from Xiaomi, the Mi 11 Ultra is 8.4mm thick and weighs around 234 gms. It features a giant 6.81-inch QHD+ resolution AMOLED curved display. The smartphone is IP68 certified which makes it water and dust resistant for upto 1.5 metres for about 30 minutes. It has a somewhat raised island camera on the rear side that includes triple cameras with a bunch of sensors and another mini display. Again, the Mi 11 Ultra smartphone is equipped with a Snapdragon 888 processor with an octa-core CPU that runs at 2.84 GHz and three performance cores running at 2.42 GHz and four cores running at around 1.8 GHz. The Xiaomi Mi 11 Ultra is powered by a 5,000 mAh battery that can be charged by a 67W charger along with wireless charging.

At the moment, most major smartphone companies have already started offering a number of 5G devices too and the phone coverage depends mostly on your location and the carrier. Due to this reason, if you buy an iPhone 12 or Samsung Galaxy S21, you will get a significantly faster internet speed. Now, the budget smartphones or smartphones costing below $500 will not have a 5G support as of yet. So, if you are keen on having faster internet connectivity on your smartphone then you can definitely try the above phones apart from Google Pixel 4A to have an in-built 5G support. What is your favorite smartphone to buy in 2021? Let us know in the comments below.