Reading Time: 5 minutes
The Daily Blog Point / Technology  / With its new Lasso App, Facebook is Making Another Attempt to Appeal the Teen Market
0 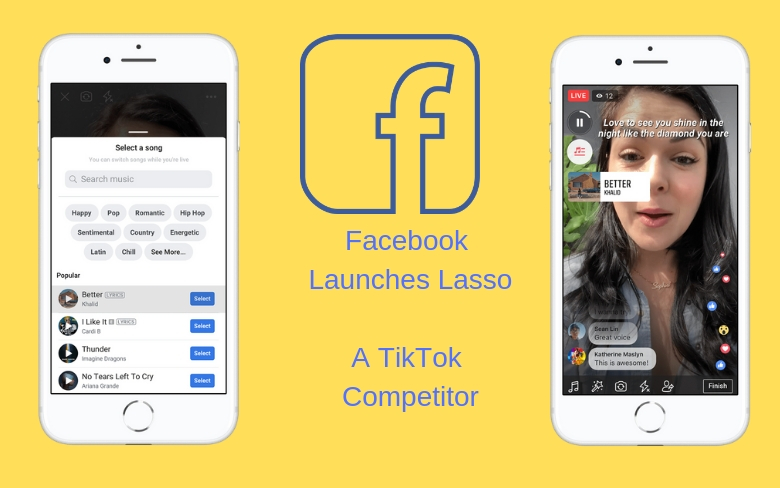 After cloning Snapchat, Facebook is running behind developing an app that is similar to the Chinese short-form video sensation TikTok by launching a knock-off app called Lasso. Lasso is Facebook’s answer to the mobile lip-syncing playfield that has gained immense popularity among young users, not only in China but also in the West.

Lasso- An app similar to TikTok

Facebook is now giving a lot of attention on developing an app called Lasso which will allow people to share short videos with soundtracks. TikTok already looks like the next big app among young users, no wonder Facebook is following the lead and playing chase, very much like how it did with Snapchat when there was an existential threat to it.

Facebook is now aware of the fall in the demographic which has occurred in the last 5 years. At the time of its launch in 2004, Facebook came out with a focus on college students. After that, when they were expanding and accepting more people, younger people rushed in to use the platform and then a lot of us were also bugged by our parents on teaching them how to use Facebook.

Now Facebook is not a platform that kids are interested in anymore. Almost 50% of teenagers are saying that they are no more interested in using Facebook, they would rather use other social media platforms like Snapchat and Instagram. With this, even Instagram’s demographic is changing largely, in the way that elderly people in the age group of 45-60 are starting to use Instagram. So Facebook is now looking at another trend and trying its luck by developing something related to it.

In the month of October, it was reported that Lasso was in the development phase. This time around Facebook has been a bit different in the method of rollout where they have chosen to make create noise about the app they are launching soon. The first real mention of this app was done by Facebook’s Product Manager in one of his tweets early this month.

Lasso comes across as a clone of the popular Chinese app TikTok. But there is just one difference here. While using Lasso, a user is allowed to post 15 second short clips to their profiles which are similar to Vines. This move is considered to be a potential selling point as there’s clear demand for an app similar to Vines. V2 launched earlier this year but it didn’t quite pick up the momentum or attract people’s attention in any way.

How is it different?

But what really makes Lasso so interesting that people will jump from TikTok to Lasso? The only option that is visible right now is the possible integration of Lasso with the Facebook and Instagram apps. In the beginning, users will only be able to post their Lasso videos on their Facebook stories. The support addition on Instagram stories will be done later in the future.

Facebook also has a large number of resources to regulate a platform of largely underage users. Musical.ly was another similar app to TikTok, only that it faced issues like the inappropriate content of minors on the app and major legal issues arising from a problem like this. With Lasso, Facebook has established algorithms which will automatically identify and remove any inappropriate content on the app. Facebook is also focusing on hiring dedicated people in order to keep the platform safe for young users.

Available only in the US

Currently, Lasso is only available in the US for both Android and iOS users. There has been no additional information as to when Lasso will be made available in other countries. But we are expecting it to roll out soon, probably in early 2019.

Considering the failure of Facebook’s teen-focused standalone apps in the past like Slingshot, Lasso will have to start from scratch as a standalone app and create a unique niche for itself in the young users market, which seems to be a bit difficult right now, to be honest. Facebook can only make efforts at having the initial content creators to give out something that is attractive and compelling for the target audience.

Only that will convince a lot of other people to download the app and use it. This could prove to be an uphill battle, even for a platform like Facebook.