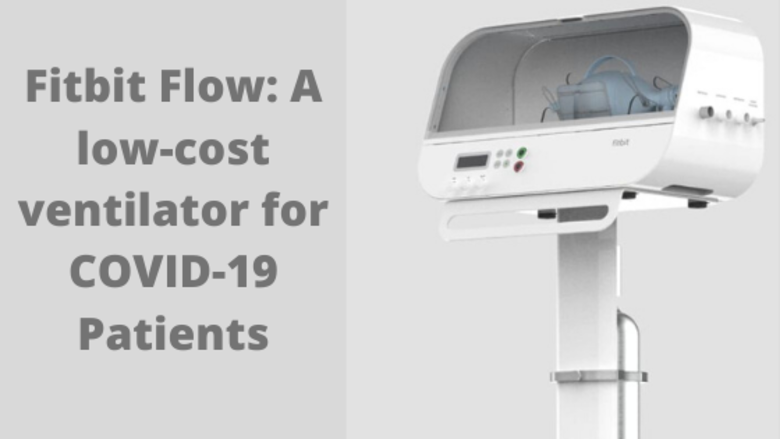 Fitbit, the wearable giant has joined NASA and Dyson to manufacture low-cost ventilators to help during COVID-19 crisis. NASA had been approved to manufacture and sell their ventilators late last month. Now, Fitbit comes with a $5000 ventilator which has been given a green signal by the FDA for emergency use. This means that it can only be used during COVID-19 crisis and not after that. According to The Verge, Fitbit Flow would be sold around $5000, which is considerably lower than conventional ventilators and the production is expected to begin this month.

According to the American Thoracic Society, a ventilator is a life support system that assists people to breathe when they are unable to breathe on their own. The ventilator helps to get oxygen into the lungs and get rid of carbon dioxide out of the lungs. It is important to note that the Flow isn’t a traditional ventilator, nor it is designed to be a replacement. According to FDA, it is only to be used when an FDA cleared ventilator isn’t available during the COVID-19 pandemic. To this, Fitbit explained that the Flow has been developed to act as a makeshift ventilator to be used during the COVID-19 crisis as healthcare establishments are running out of ventilators. It doesn’t mean that it could be used in hospitals after the pandemic resides, for that it would need further testing and approval from FDA.

Fitbit has expressed that it proposed to use the pre existing infrastructure to quickly manufacture “large volumes” of these easy to use and low-cost ventilators to keep COVID-19 patients alive until they are shifted to a traditional ventilator. Fitbit also suggested that this is a provisional shift in focus and there are no plans to continue manufacturing Flow once the pandemic resides.

Fitbit says that the Flow is engineered around resuscitator bags generally used by healthcare professionals/ paramedics but it has supplementary sensors and alarms to assist patient monitoring efficiently. The company approached medical experts and practitioners while developing the Flow and expects it will be easier to use than conventional ventilators. The design is intended to inspire confidence. The machine is built from laser cut aluminium, it is devised to be user-friendly and insightful which reduces the burden on highly specialised healthcare professionals who are usually expected to operate a conventional ventilator. The hardware is designed to have a transparent viewing window for medical staff to examine the automated pumping from a distance and the Flow can be used with a stand or can stand firmly on a table top for ease of use. The stand is also modular and has the capacity to accommodate different sizes of oxygen tanks.

Fitbit CEO and co-founder remarked in a statement that the wearable company saw an opportunity to showcase their competence in advanced sensor development, manufacturing and their efficient global supply chain to address the dire and continuous need for ventilators and help make a contribution in the worldwide fight against COVID-19. Fitbit confirmed its intentions to produce a ventilator last month after concerns surfaced that there aren’t enough ventilators to handle all the patients who will need them during the ongoing crisis against coronavirus. The Wall Street Journal reported that in April, the United States government had been struggling to purchase thousands of ventilators to deal with the virus outbreak but the demand was lower than expected. Nevertheless, the ventilators may be needed if COVID-19 spreads beyond or due to factors such as the start of the influenza later this year. Only time will tell.