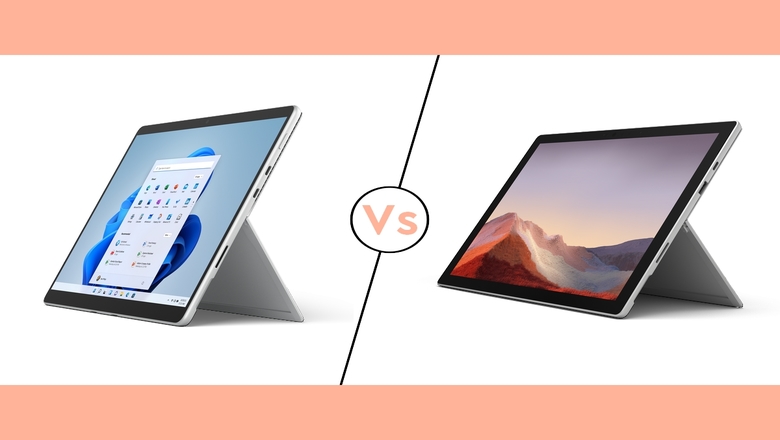 Though it is not a huge disparity and the Surface Pro 8’s upgraded internals and display do justify the increased cost. The base Pro 8 is equipped with double the RAM of the base mode Pro 7. The base model of the Pro 8 comes with an 11th Gen Intel Core i5 CPU and the Pro 7 only had the 10th Gen Core i3 chip. Microsoft seems to have revamped the design of the Surface Pro 8 slightly. It is around the same size and a little heavier than the Pro 7 with a 13-inch display. It is a small but significant change over the 12.3-inch screen in the Surface Pro 7. Hence, in terms of design, the Surface Pro 8 is a clear winner over the Pro 7. It is not completely different though, the Pro 8 has a rounded, flat-edged look of the Pro 7, with the same built-in kickstand and optional detachable keyboard that converts the Pro into a Windows laptop. The Pro 8’s screen has a refresh rate of either 60 Hz or 120 Hz refresh rate, which you can configure in Windows 11. While 60 Hz is good enough for day-to-day tasks, pumping up to 120 should make the experience of using a stylus a little and more enjoyable. This is because the screen can only respond to input as fast as it can display a new image.

The 120 Hz display will also let you achieve frame rates higher than 60 frames per second while playing games. Though it will be difficult to do that with the Pro 8’s integrated graphics chipset. Hence, the display on the Surface Pro 8 is much better than that of the Surface Pro 7.

The cameras in the Surface Pro 8 are a tad bit better than the Pro 7, though it still comes with a 5MP selfie camera with the capacity to shoot videos in up to 1080p. It also supports Windows Hello, meaning you can log in to Windows 11 with your face.
The rear camera has got a considerable upgrade, up to 10MP from the 8MP rear cam on the Pro 7. It will definitely enhance the quality of your images, and the Pro 8’s camera can capture video in up to 4k.
If you actually care about the camera improvement in the Pro 8, then it might be worth upgrading your Surface Pro 7. Most users never tend to use their tablets to take pictures, so if you are not one of those then the Surface Pro 7 is just fine for you.

Microsoft confirmed that the Surface Pro 8 can last for up to 16 hours of use on a single charge. Plus it can charge from 0 to 80% in an hour. The Pro 7, was marketed as lasting up to 10.5 hours on a charge. But most users feel that the battery on the Pro 7 never lasted more than 8 hours.
Hence, even if you are sceptical about the advertised battery life, 8 hours of runtime is still pretty decent. The Surface Pro 8’s battery will definitely run for more than 8 hours.

The Surface Pro 8 has a minor but significant change over the Surface Pro 7 and the Pro 7 Plus. It is better to see Microsoft updating the base level RAM from 4GB to 8GB along with a bigger brighter 13-inch display on the Surface Pro 8. Moreover, the upgraded 120 Hz version makes doodling on the tablet smoother and more fun.

Having compared both the Surface 8 Pro and the Surface 7 Pro, it is safe to say that it is not worth updating to Surface Pro 8 if you are starting to notice a slowdown on the older tablet. If you need a 2-in-1 Windows tablet to get your work done, the Pro 7 should be enough to meet your requirements. If you are a creative person and use the Surface as your creative weapon then you must take the advantage of the Surface Pro 8’s powerful 13-inch 120 HZ display. What do you like about the new Surface Pro 8? Do you think it is worth upgrading your older tablet to the Surface Pro 8? We would love to hear from you.