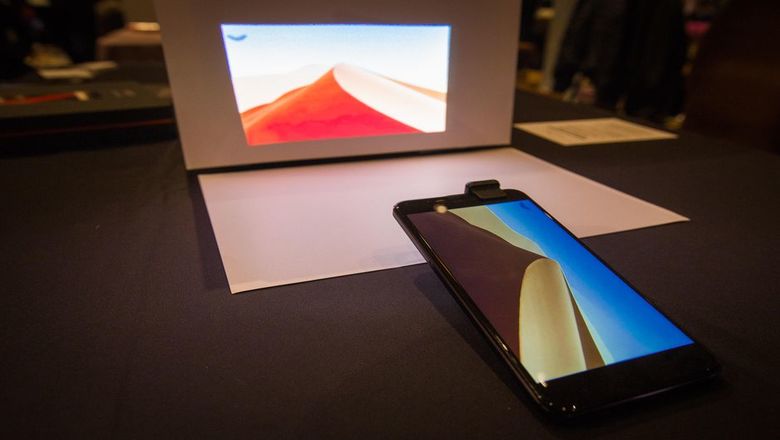 A vast majority of video watching now happens on mobile devices only. Smartphones have become the all-round entertainment device. But still, many of us find the mobile screen not enough for watching a video. The few inches of the screen simply just do not cater to our expectations of a visual treat while watching a full movie or a television show. To address this terrible shortcoming that most mobile devices do nit have any clue about, Movi came into the picture. It is the world’s first Android smartphone with a built-in projector.

It literally promises a revolution with the viewers who always had to compromise with the small smartphone screens while watching their favourite visual contents. Now with Movi in hand, you can just pop out your video on a flat surface and enjoy crisp 720p visual expanding up to 200 inches diagonally.

Comparing the Movi with other erstwhile options

Though as the built-in solution it is entirely new, the idea of including a projector is not entirely new. Motorola as the smartphone brand already introduced smartphones that can deliver the same feature by connecting to projector accessories. For instance, Insta-Share Projector Moto Mod can easily work with Motorola Moto Z phones, but the standalone accessory costs $300 which is a bit expensive as a solution for the projector. This is where Movi looks like a better bargain with no additional cost for an expensive projector accessory.

The best thing is, the integrated projector of the Movi phone doesn’t add any excess bulk on the phone. It looks pretty slim and feels very lightweight. The in-built projector with all cutting-edge features is delivered within the budget of a mid-range flagship, and that’s precise makes Movi a lucrative buy.

Movi is embedded with the most advanced and latest laser pico projector with the ability to deliver high definition (HD) 720p visuals on any flat surface. The projector is also empowered with MicroVision’s PicoP® Scanning Engine that allows projecting any visual contents up to a dimension of 100 inches anywhere.

Movi Offers a stunning 16-megapixel rear camera and an 8-megapixel front camera. Coupled up with the MediaTek signal processor it offers DSLR-quality photography. It can capture crisp, clear and vivid photos and videos in different light conditions with true colour precision.

Movi delivers awesome battery life that remains alive for as long as 8 to 10 hours even with media playing. The certified power adapter is equipped for fast charging and can charge up to 4 times faster compared to other adapters.

Movi featuring a Miracast 2.0 streaming feature allows streaming digital content from the smartphone to the connected TV compatible with the phone.

Movi comes loaded with the latest range of connectivity solutions including 4G LTE speed, Wi-Fi 802.11 a/b/g/n 2.4 GHz and 5.0 GHz, NFC and Bluetooth™ 4.2 high speed. It is also capable of connecting as much as 8 devices with a hotspot connection.

Movi also comes with smart security features such as biometrics fingerprint technology along with MediaTek Sense ID. Thanks to this feature a unique 3D image of the fingerprint is processed and registered for authentication.

Movi flaunts the style and look and feel of a high-end flagship. It comes with a 10 Point GFF touch panel display making it look really plush.

Nothing is complete with a mention of the awesome projector that this phone comes loaded with. The MicroVision engine can project images on any surface with unmatched visual clarity and without any loss of focus. The laser beam scanning (LBS) technology used for pico projection along with 3D sensing make this ideal solution for a smartphone projector. If you look for a high-end smartphone with a projector, you have no other choice than the Movi.