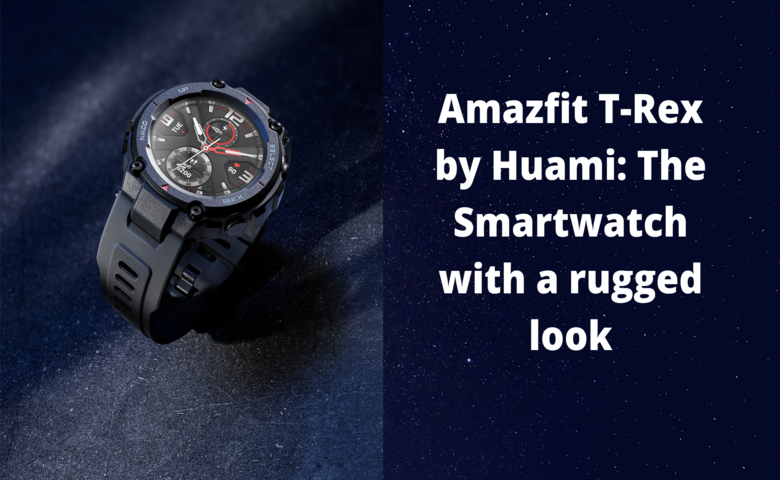 We have to confess the fact that a watch being called the “T-Rex” was a deciding factor to check it out. Who wouldn’t want to say they have a T-Rex on their hand? Pretty cool, right? Even better, was Huami’s assertion about its battery life and the T-Rex doesn’t disappoint. The Amazfit watches and wearables are made by Huami, the company responsible for making Mi bands. With products like Amazfit T-Rex, the future of wearables is looking bright.
The Amazfit T-Rex is Huami’s first sturdy smartwatch at under $140, a perfect reply to competitors like Garmin. However, this comes with a couple of advanced features. The look and feel of the Amazfit T-Rex is pretty similar to Casio’s G Shock, only this is a smartwatch.

The Amazfit T-Rex is a rugged smartwatch, staying true to its name. This smartwatch is not for anyone with a small wrist, but it gives that macho feeling at this price. It comes with enormous bezels and stark lines across the case and its strap. The T-Rex is a relatively lightweight smartwatch at 56.7 grams. However, smartwatch weight is just a relative concept.
The watch case is plastic and boasts four buttons: up, down, back and select. This particular watch case design enables an excellent battery life. The Amazfit T-Rex can run for 20 full days on single charge with normal use and full 20 hours with GPS use.

The display of Amazfit T-Rex has made up for the lacking slightly cheap hardware. The T-Rex has a 1.3 inch AMOLED display panel covered in Gorilla Glass 3, amazing right? It is best to have an automatic brightness turned on with this smartwatch and it will adapt accordingly. The Amazfit T-Rex has got a MIL-STD-810G durability rating and 5 ATM water resistance capacity, enabling it to endure anything thrown at it with relatable ease.
Usually, smartwatches and fitness trackers above $200 level have IP67 or 68 rating, while many don’t have a durability rating. Huami mentioned that it has 12 military certifications which allows the watch to work between minus 40 to 70 degree celsius. The Colours reflect the rugged exterior too. This Amazfit smartwatch is available in Army Green, Khaki, Camouflage green, Rock Black and Gun Gray.

Amazfit T-Rex : The Good and Bad

The Amazfit T-Rex has features like GPS, optical heart rate monitor and almost everything that you might expect from a smartwatch. The battery capacity of 390mAh isn’t noteworthy and is charged with a magnetic pogo-pin cable like other smartwatches. If you are buying the Amazfit T-Rex, you will just need to charge once or twice a month depending on usage. It is so convenient that you don’t have to take it off often, it feels great not to think about charging one more device.
The Amazfit T- Rex uses its own Amazfit OS, rather than using battery sucking WearOS.  If you have been using the Apple Watch or a smartwatch with WearOS, it will be difficult to adjust to the Amazfit T-Rex. As, you are stuck with 20 plus preloaded watch faces which are non customizable and only a few watch faces include important updates like Weather.
The software of Amazfit T-Rex is pretty basic. It has trackable activities like walking, running, cycling, swimming, climbing, elliptical etc. It is easy to access your workouts but it will take a whole lot of button presses. The major drawback is that you will have to depend on the Android or iOS app to configure with limited options on the watch itself. It would be a crime to call Amazfit’s software an advanced smartwatch OS, however it does the job in terms of excellent battery life. This is a noteworthy feature for some people though it would be a disappointment  for Apple or Samsung smartwatch users.

Who should buy Amazfit T-Rex?

It is worth noting that if you are looking to get a decent smartwatch with G-Shock like design a very appealing battery life and not dependent on WearOS then the Amazfit T-Rex is your best bet. It is available on Amazon for $139.99 and is made available in India starting from INR 9,999. If you would like to read more about technology and gadgets, please subscribe to our blog for latest updates.